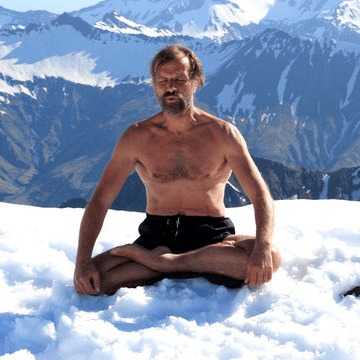 Hof has been studied by doctors, who monitored him during his ice immersions. He also participated in a study on the effects of his techniques on the autoimmune system.

I remarked to my wife once that, while I enjoyed his upbeat style, I wasn't sure he really understood the science that he'd been told. Anyone who knows me, knows that when faced with people who make unusual claims, I say, "Show me the science!"

I'm not debunking the Wim Hof Method. Merely clarifying what's actually happening, which I think is important in any physical conditioning. I practice the method almost every day.

A Quick Review of the Breathing Technique

There are recordings of Wim teaching the technique, and invariably he says that participants are increasing the oxygen in their blood, that this is what's causing tingling and lightheadedness, and leads to being able to hold the exhale for so long.

The truth is pretty much the opposite.

Taking long, deep breaths ("fully in"), then exhaling partially ("not fully out, just letting go"), doesn't substantially increase the oxygen in the blood. By substantially, I mean probably not even 1%. But, it does lower the carbon dioxide (CO2) quite a bit. Decreasing CO2 causes the blood cells to retain their oxygen, depriving it from the brain, muscles and tissues, and this is what causes the tingling and lightheadedness.

The inhalation reflex is triggered in the body by too much CO2. So, what's happening in the technique is the person's CO2 is depleted. During the exhalation hold, it takes longer to replenish the CO2, so the inhalation reflex is effectively suppressed. The CO2 increases, the blood cells start releasing oxygen quickly. On the full inhale, the body resets both levels. This results in a slight head rush.

What I've described is shown quite nicely in a segment of a video examining the technique, where the presenter attaches a pulse oximeter to himself to check his oxygen levels1 2.

Hof says that during the technique, the body becomes more alkaline. This is basically true. Lowering CO2 increases the blood's pH level, which means the cells are more alkaline and less acidic. Is this good or bad? Depends. Too much too long is likely bad. "Alkalosis can lead to constriction of the brain's blood vessels, and reduced calcium levels, leading to increased nerve and muscle excitability.3" However, the increase in pH is short, and the alkaline levels return to normal quickly, so there doesn't seem to be any danger.

On a web page describing two studies conducted on Hof, and also people trained by him, scientists learned that during the technique Hof is stimulating his endocrine system, increasing adrenaline and noradrenaline, and decreasing cortisol. "This “adrenaline rush” resulted in the release of inhibitory cytokines that would “calm down” the immune system and not making it over-react4."

In the study, Hof and volunteers were injected with a component of E. coli to simulate an infection. Those practicing the breathing technique had little or no reaction. In short, the technique influenced the autonomic nervous system (which, by definition, shouldn't be possible). The study says this could have "important implications for the treatment of a variety of conditions associated wtih excessive or persistent inflammation, especially autoimmune diseases.5"

I first learned about the Wim Hof Method when researching how to reduce my racing thoughts. While I don't think the method has improved that (anti-depressants have helped a lot!), I'm convinced that I'm experiencing other benefits. A simple one is regular meditiation, which has scientific support for good mental health. Another is facing the challenge of 90 seconds of cold shower each day (after about three minutes of warm shower).

Is there a psychological benefit to subjecting myself to a controlled adrenal response each day? Maybe so. Instead of increasing my overall stress, I may be decreasing it because I'm learning that I can cope with a stressful situation--in this case, suffocation.

Unlike many such methods, Wim Hof Breathing has solid science behind it, even if Hof himself doesn't present that science accurately.