This doctor puts many writers to shame. Here, posted without permission, is the complete text because I think it deserves to be read without hindrance. If the NYT asks me to remove it, I will of course comply. 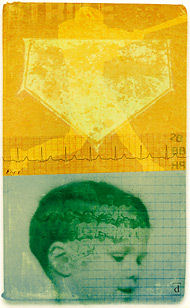 Late one evening, I was asked to see a patient with cancer and a possible infection at an incision site � a completely routine transaction.

When told the details, however, I gasped: the patient's name was that of a retired professional baseball player, someone I had followed closely during my youth and not-so-youth.

He was a very good though not famous player, the sort that serious fans knew about and admired.

I thought someone else might coincidentally have the same name, so I hurried to the floor and read the chart. There it was, under "occupation": retired baseball player. His records also revealed that the cancer was advanced and involved bone, where the surgery had been performed.

I have cared for illustrious people before. I practice in New York, and illness is the great equalizer, flattening big and small alike with the same indifference.

Generally in this circumstance, any initial awkwardness quickly yields to the business at hand.

But this was different. My patient didn't know it but long ago, when he was a rookie and I was a kid, he had broken my heart. New to the major leagues, he abruptly supplanted another player, my all-time favorite, from the starting lineup.

My childhood favorite was getting old and had become expendable; it was left to the fresh-cheeked rookie, now my patient, to bump him into obsolescence. Make no mistake, my patient was a natural even then � swift, limber, emotionless � but a bitter year or two passed before I could appreciate the fineness of his talent.

Before examining him, I imagined sharing this with him. I would check his infected wound, give some recommendations and then we'd shoot the breeze about his career. I would tell him that, because of his brutal intrusion into my life as a fan, I had learned hard lessons on the capricious nature of heroes and hero-worship, the inevitability of change, the basic facts of life itself.

But when I entered the room, he showed absolutely no interest in my presence. Rather, he was stationed at the window, staring out into the black night.

We spoke briefly about his symptoms. Then I inspected the infected area. From a medical perspective, it was straightforward. I told him he needed a few more days of intravenous antibiotics but that it would heal nicely.

He flashed me a look. Could he go home tonight and get the antibiotics there?

I told him I would have to discuss the situation with his surgeon.

So I told him I would see what I could do. The glare eased and he almost smiled. "O.K., thanks," he said.

I headed for the door, organizing my thoughts. Before I left the room, though, he called out, "Hey, Doc."

I turned and looked at him. In his blue jeans and T-shirt, his dark hair intact, he was as trim and fit as he had been on his baseball card.

"The infection is no big deal," I told him. "Minor bump."

He took in this information as evenly as he took in everything � fastballs, sharp grounders, close plays at the plate. Boy, I knew those soft eyes and sad face. Blinked once and it was accommodated.

I left the room and made the call to the surgeon, arranged for an immediate dose of the antibiotics and asked the intern to settle the paperwork.

Yes, he could go home tonight.

Pleased with myself, I returned to his room with the news. He, however, was back at his spot near the window, staring into the night. I updated him on the plan, and he nodded.

I stood a long moment, faintly hoping to talk a little baseball, though I knew we would not. He continued to stare out the window, and finally I left his room in embarrassed silence.

I read his obituary a few months later. It described his fluidity when fielding a baseball, his clutch hitting and love of the game. No mention, though, was made about his calm understanding of the way things worked � about how he blinked and understood it all, like a pebble disappearing below the water.