And Some Days You Bite the Dog

Today was a pretty good day. I completed all my "A" level tasks, and used a few new software tools. I also played around a little more than I wanted, and cheated slightly on my workout (I didn't do much). But I feel good, darn it!

Here are two business cards that I created for my brother, who, if he reads this before receiving them, will know what to expect. You can make comments and/or vote for the one you like better. And, if you know someone looking for a talented conductor, either as a student or for an orchestra... 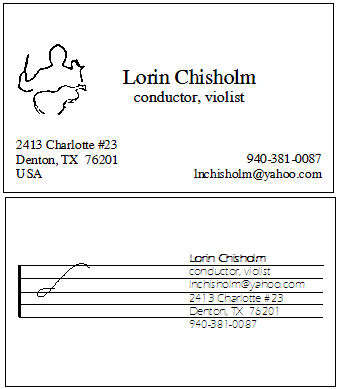 Lorin provided the artwork in the top card (not sure if he drew it himself, but I wouldn't be surprised). It was in a jpg, not the best quality. I really wanted a vector drawing. I ended up downloading a program called potrace, converting the jpg to a bmp, and running it through both mkbitmap and potrace, outputting to an svg file. When I opened that file in Paint Shop Pro, it looked great! Here are the original and result, side by side. 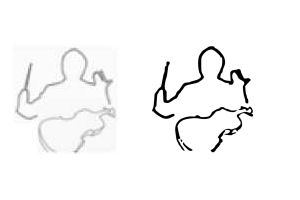 For some reason I got really irritated that iTunes doesn't let me choose how to store CDs that I rip. By default, it (and many other rippers) stores files in a subdirectory named for the artist, then corresponding albums. This would be okay if most of your stuff was pop CDs, but not so good if you like classical, jazz and film scores, especially compilations. It just bugged me that I couldn't find a CD in a single folder. So, I searched around and finally found a nice, free program named The GodFather. It's not quite intuitive, but is pretty powerful. I easily and quickly reorganized my files and generated a new playlist that iTunes could import. Next, I'll finally fix the mp3 tags for several tracks. When that's done, I'll probably do a batch rename of all the files. Along the way, I'll try to add artwork.

Some day I'll really get serious and rerip all my CDs using a CD quality or lossless encoding. Those will become my source, which I'll convert to smaller files depending on the target device.

It was very interesting to read about how sites like CDDB (who are evil) and freedb determine the ID of a CD. Basically, they assign a unique ID based on the exact length of the CD, and the position and number of tracks. As one site pointed out, it's possible to dub a vinyl album digital output, convert to MP3, mark the tracks, and then have the album found via one of the services.

I played with a CD ripper named CDex. It's also free, not fancy, but has an important feature to me. I can assign different artists per track via its (non-intuitive) trackname-splitting approach.

So, what else did I finish today? You don't really care, but here's the list:
1. Updated a new report for Albert, making a small change.
2. Listened to my long lost friend, Bizhan's, music recommendations, and corresponded with him via email.
3. Sent my mom a card containing some small gift items.
4. Exercised (a little).
5. Finished and sent my brother his business cards.